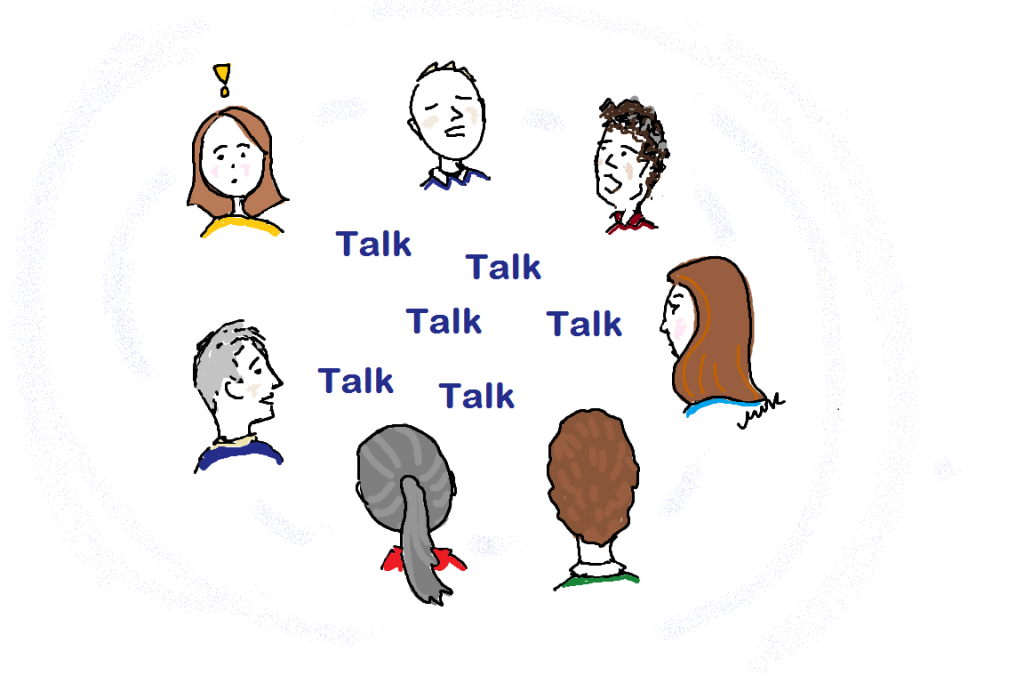 This week I took part in a conference on change management. As part of our workshop, we were tasked with creating a change initiative, brainstorming a list of stakeholders and their respective receptivity to the change, and creating a communication plan. The team was comprised of men (ages ~30-60) and women (ages ~25 to 50), and all were white. Please pause and picture this team. Now, for fun… who do you think did the most talking?

Your answer to this question will be greatly influenced by your culture: your age, gender, ethnicity and/or race. Each of these variables affect how and how much we talk in a group situation and how we perceive others talking.

Lately I have been reading Deborah Tannen’s book  You Just Don’t Understand: Women and Men in Conversation

a research-based book that explores the differences in language and gender.

The book was written in 1990, and based on the names and some of the activities referenced in research (e.g. sharing “friendship pins,” an act I participated in in 1982) some of the data feels dated and certainly reflects a different cultural time. However, many themes still hold true.

One of these items is the idea of interrupting in communication. Tannen suggests that certain cultures (like the Finnish-American culture I was raised in) expect longer pauses between conversational turns and one speaker speaks at a time. In other cultures (like many Italian-Americans) simultaneous speech is the norm, and this practice shows involvement and connection.

Tannen also shares research that suggests men tend to feel more comfortable jumping in and talking over the other (simultaneous conversation) than women. (Remember—these are generalizations, not rules. Our cultural make-up does not dictate our behavior).

As I worked in our change-initiative team this week, I noticed that some of the men eagerly jumped in and exchanged information, interrupting each other to be heard. It was like watching a ping-pong game, verbal messages tossed back and forth without pause and sometimes overlapping: ping, pong, ping, pong… I waited for my turn, watching the volley. But after some time it occurred to me that if I was going to have a turn, I was going to have to interrupt, jump in and say something without an opening. The idea made me uncomfortable. But I did it. And I did it again.

It felt kind of good. Kind of rude, but freeing too. No one in the group seemed phased. They just agreed/disagreed with the content like they would have for each other and moved on. It was liberating, and I had to ask myself: What in the world was I waiting for?

We are highly influenced by the cultural rules we are raised in. Sometimes these rules do not serve us. As professionals, it is good to be aware of our own conversational habits and to note those exhibited by others. We want to ensure that all voices are heard, especially when working on problem-solving, because research shows again and again that the best solutions come from diversity in thinking. And sometimes for cultural reasons, not everyone feels comfortable jumping in to share their thoughts.

When you are tasked with working in groups, take that moment to look around the table and see that everyone has been invited to speak. The best group outcomes happen when everyone is heard, and you will get to see the world through from a vantage point otherwise unreachable.